I would like to talk about how to turn vim into an IDE, with some special focus towards Elixir, which is the language of choice at Subvisual.

This post is a series of tips on plugins / configs to use in order to make your development experience a lot more enjoyable.

I'm the first one to recommend people not to learn how to use Vim, which requires learning a lot of new habits and concepts upfront. Modern editors such as Atom and VS Code are just as good, or even better, at least regarding the learning curve.

There are very interesting and productive ideas behind Vim's way of doing things, though. So, if you don't use Vim, hopefully you can at least find some of these interesting, and incorporate them into your own workflow by finding the equivalent approach on your editor.

Because the editor should do it for you.

This is something modern languages have improved a lot on recently. Code readability is a must. But instead of checking linter warnings all the time to find that annoying whitespace that was missing, or following the rules set by our project, we should just focus on what matters, and let the rules enforce themselves!

Elixir's formatter, introduced in version 1.6, is a must-have now. Running mix format on a project will automatically edit all our files according to the code styleguide defined. And most of that styleguide is standard for Elixir as a whole, making the configuration itself extremely minimal. Here's the formatting config taken from fsmx, one of my packages:

It does two things only:

Running mix format under this project will automatically format any ugly-looking code. But you can go one step further and let your editor do it for you:

vim-ale is a linting engine for vim with autofixing capabilities. It integrates with linters for pretty much every programming language. Here we're configuring it to use the mix_format fixer, which runs mix format on the current buffer whenever it is saved. Here it is happening in real time:

Language Servers are all the rage nowadays. They provide a common API for editors to understand each language's particularities, without having to resort to ad-hoc plugins that are never without their flaws.

Language servers power tools such as the usual autocomplete list, "jump to defintion" and "find ocurrences" that Java and other OO-programmers are used to, but in a more systematic and language-agnostic way.

This gives you several new superpowers:

Dialyzer, a static analysis tool for Erlang/Elixir is, by itself, a very useful but cumbersome tool to use. It often takes too long to run, and ends up relegated to being that tool you only run every couple of weeks, only to find out you've been piling up on those warnings from the type system.

Having your editor run it for you in the background, and allowing you to have near-instant feedback, makes the entire process much better. 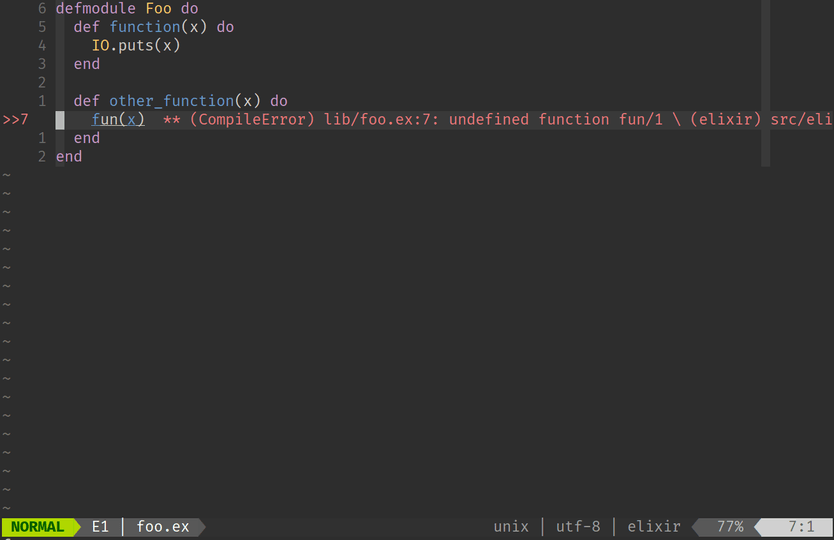 Shortcuts such as this (and many more which you can check on the help page) provides quick contextual navigation within Elixir functions.

3. View documentation on the fly

4. View an outline of current file

I've been searching for a good find & replace solution for Vim for a long time. (dare I say, I've been finding & replacing them all this time?)

Recently, I found my perfect one so far, in the form of a very simple and hacky trick: quickfix-reflector.

The quickfix window is a special non-editable buffer, usually used to display things like log messages or compiler errors. It can also be used to show search results, such as when calling :Rg some_function to find all ocurrences of some_function in a codebase.

quickfix-reflector does the simple magic of making this quickfix window editable, and then reverse-finding the locations of each original search result, and update them. So find & replace operations become easy & powerful. I love especially the fact that the replacement query doesn't necessarily have to be tied to the original search. It just ends up being applied on the lines that were found. Such as in this example, where I'm searching for some_function, but then changing only the some portion:

If you're doing some form of Test Driven Development, you likely have an alternate test file for most of your Elixir files. A lib/foo/bar.ex will have a corresponding test/foo/bar_test.exs counterpart.

Navigating between the two is a pattern that often comes up. You might want to switch from implementation to tests, or back. Or open tests in a side pane to work on both in parallel.

That's all possible, and configurable, with vim-projectionist.

I won't get into too much detail about it, because I already have another blog post on this exact subject, but here's a picture's worth 1000 words

Not being able to run tests quickly is one of the things that frustrates me the most, and which I try to push people to improve on. Not only because I'm a productivity freak, but because Test Driven Development is all about a fast feedback loop. If you take too long to trigger your test suite and get results back, not only are you going to do less of that, you will also tend to write less tests in the first place.

I go for the opposite. Not blindly reaching 100% coverage, but carefully looking out for missing edge cases and untested flows.

For that, vim-test is invaluable, since it allows me to run tests with a couple of keystrokes. Let's go through what a less ideal flow looks like for running tests:

Using vim-test, that can all be condensed to a couple of keystrokes, and no context switching at all:

Seriously, how much more efficient is that compared to the manual approach?

This is an overview of some of the things I use on a daily basis to improve my productivity. Even if you don't use Vim, perhaps you can bring some new ideas onto your own flow as well, or even implement similar plugins for your editor, if they don't exist already.

Feel free to poke around my dotfiles if you're interested in seeing more about of Vim setup. And let me know on Twitter if you have any questions, or better yet, any new tips I can use. 👋🏽